Difference vs. Ratio of evidence in sequential sampling models

In sequential sampling models - for instance Ratcliff and Smith, (2006) - participants' responses in a binary choice experiment are modelled by a particle, which moves up or down towards the boundaries for selecting each response over time according to the evidence in favour of each, or, analogously, their expected utility (Busemeyer & Townsend, 1993), in a way that looks something like this: 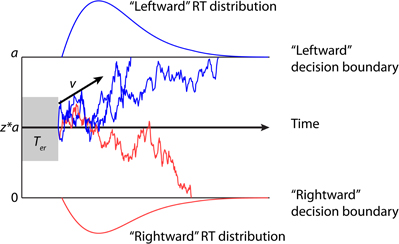 My question is if anyone knows, and preferably can provide a reference for, whether in such a model responses are best predicted by

My intuition is that it's the ratio between the two responses, rather than the absolute difference, which should best predict responses, but I can't find a reference for this, and I'm sure this question has been answered somewhere before.

Has anyone any ideas here?

Unless I'm misunderstanding what you mean, ratio of evidence is actually a terrible method because that would end up with an immediate decision as soon as any evidence is encountered for either side, giving a ratio of infinity for that side (something/0 is greater than any finite decision threshold).

Not the answer you're looking for? Browse other questions tagged reference-request cognitive-modeling decision-making or ask your own question.