How exactly do "you" think and interact with your body?

It has been established that our brains control many processes that your body carries out autonomously and involuntarily. However, other actions are controlled by you. (e.g. you lift an arm, you walk). Those are not things that the brain manages without you being aware of it. How does a person communicate with their brain to give commands to rest of the body? Essentially, if I'm wording it correctly: what is the difference between the brain's involuntary motor tasks and consciously managed motor tasks.

You have asked an excellent question. However, this innocently short question involves many dimensions: the philosophical discussion of consciousness, the neurobiological basis of motor movements, reflexive actions, relationship between sensory and motor areas in the brain etc. I'll try my best to elaborate on my answer: meanwhile, your best bet would be to search the term "Control Consciousness" online.

Here is an extract that may (if you can navigate through jargon) help guide you in the right direction. Note that the author is trying to argue for the position that the difference between conscious and unconscious motor tasks depends on the hierarchy of the motor cortex:

Allocentric-Egocentric: Allocentric refers to being linked to a reference frame based on the external environment and independent of one's current location in it. For example, giving the direction as "north," as opposed to "right" (which would be egocentric).

The main idea of ‘‘directness’’ here means something like ‘‘not mediated by sensory inputs or imagery thereof.’’ To illustrate, even on the sensory theory, motor commands have an indirect influence: I turn my head and thus see something other than what I was looking at. But here the changes exerted on the conscious state by the motor command are mediated by changes in sensory input. If motor commands themselves or copies of motor commands - so-called efference copies — can make a difference on conscious states without the difference being mediated by changes caused to sensory inputs, then this would be an instance of the influence of motor commands being direct. As stated, the most basic form of the theory is inadequate for distinguishing conscious from unconscious control states. Not just any contribution from motor commands will make a contribution to consciousness. This is especially evident in the case of unconscious control states. What is needed, then, is a means for distinguishing conscious control states from unconscious control states. And here an extension of AEI can do the trick. The applicability of AEI to motor systems looks to be a straightforward affair. First, motor systems are arranged hierarchically in much the same manner as sensory systems, with the highest levels being most remote (in terms of intervening connections) from the periphery of the nervous system. Focusing here just on cortex, the highest level is in the prefrontal cortex, the lowest level is in the primary motor cortex, and intermediate is in the premotor cortex. Further, there exist both forward projections and back projections between successive levels of the motor hierarchy (Churchland, 2002, p. 72). We may further characterize levels in the motor hierarchy as differing along an allocentric-egocentric dimension. To illustrate, a high-level motor representation may have an abstract content such as 'Grab a coffee mug' - a content that abstracts away from low-level egocentric details about the precise sets of muscular contractions required to get the job done. The most specific details will be the task of motor representations at the lowest levels of the motor hierarchy. 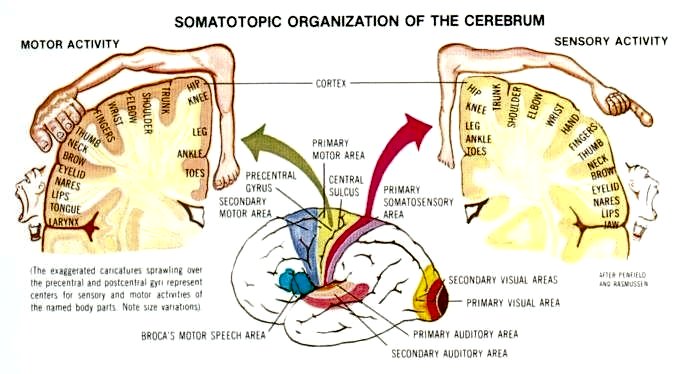 Not the answer you're looking for? Browse other questions tagged neuroscience consciousness motor or ask your own question.

2
What are the thoughts?

9
How does body temperature and oxygenation affect thinking ability?
17
Are there benefits to learning to write with your non-dominant hand?
9
Does anger increase your body strength?
0
How exactly does alcohol consumption damage dendrites?
0
How do neuro transmitters interact with neurons in the brain?
3
How do the motor system and Central Pattern Generators interact?
5
How do congenitally deaf and mute people think?
4
How exactly does transcranial direct current stimulation (tDCS) work?
6
Is there a term in psychology for when a tool is perceived as an extension of your body?