Why are the founding figures of major religious faiths credited with superhuman qualities?

The founding figures of various religions are usually believed to have superhuman qualities, such as omniscience, ability to predict the future, impeccable control over their own emotions, invulnerability, miraculous healing powers, and so forth. An absolute conviction about the unquestionability of such beliefs form the bedrock of many religious faiths.

What is the psychology behind such compelling collective beliefs? How does one analyse them in terms of various psychological parameters?

Perhaps the most compelling explanation of the origins of religions using purely psychological explanations is the theory of religious figures having a high incidence of frontal lobe epilepsy. Of course, this doesn't explain their rise in influence and - which I think should be left to historians since it goes beyond the realm of science that could prove to be reductive and merely speculative in this case.

However, there is a tremendous amount of literature of the psychology of religion, which would be difficult to summarize in one answer. The reason behind this is that this is a multidisciplinary subject involving social psychology, linguistics, evolutionary psychology, cognitive psychology and so forth - none that can alone provide a compelling answer. The Wikipedia page on this topic can be very helpful. I have tried to quote some sources regardless:

This quoted paragraph gives a flavor of the different ways to answer this problem. In this case, the author mentions the semantic memory theory of religious transmission:

Where religious ideas are expressed in words (e.g. transmitted through oratory), it is likely that the orators themselves will rise above the common herd. Most religious traditions of this sort have cel- ebrated leaders, who may take the form of gurus, messiahs, prophets, divine kings, high priests, mediums, visionaries, disciples, or simply great evangelists or missionaries. The very fact that there are so many different types of, and terms for, religious leadership is an index of how widespread and important the phenomenon is. Partly through their skills as orators, these leaders become marked out as special. But, at the same time, their pronouncements (real or attributed) pro- vide the central tenets of a belief system, and their deeds become the basis for widely-recounted religious narratives, transmitted orally. Both forms of knowledge are stored primarily in semantic memory. 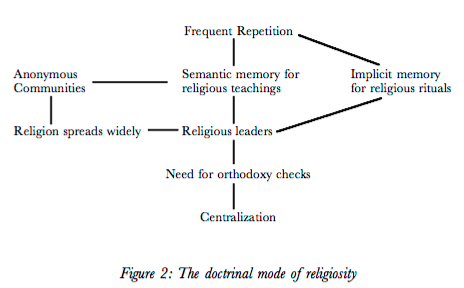 To get a picture of the TLE theory of the origins of religious figures, you should try understanding the behavioral changes caused by Temporal Lobe Epilepsy that involve intense religious experiences and hypergraphia, the intense desire to write - which could account for the cross-cultural production of religious scriptures:

Not the answer you're looking for? Browse other questions tagged social-psychology sentiment-analysis or ask your own question.

3
What is the psychological basis for people coming together during a disaster or major event?
6
Is the desire to impress others a major goal?
4
How does an understanding of the brain explain why people experience strong emotional responses to major sporting events?
3
Where to obtain and how to score the Bukowski et al “Friendship Qualities Scale”?
5
Why do males prefer females with blonde hair?
2
Why are people biased against overweight people?
5
Why are people insecure?
1
Why do some people bond with their captors and vice versa?
0
How do I score people on the Religious Orientation Scale?