How long does it take for electrical impulses from neurons to travel in the human brain?

Consider the maximal distance between two separated areas in the human brain. How fast can information via neuronal excitement travel between these two locations?

This is hard to say because not as many studies measuring this in humans have been done as have been done in other primates, like macaque monkeys, and when it is done, it is usually done in patients who have some brain issue like epilepsy and have recording electrodes implanted for preparation for a procedure, and so may not have a typical response. Also it is hard to know how best to satisfy your requirement "the maximal distance between two separated areas in the human brain".

1) a 1983 paper using epileptic patients with microwire electrodes in their brain at various regions. I pick the data of measurements of the visual response arriving in the occipital lobe because--thinking simply--it is at the back of the head on the other side of the head from the eyes, and so the "maximal distance" is the entire front-to-back length of the brain (the pathway being retina -> thalamus -> V1 of visual cortex). From the paper (page 490, bottom):

2) A 2009 paper, also using epileptic patients which found, among other things:

Axons are responsible for conducting electrical impulses from the neurons's cell body. The longest axons in the human body are those found in the sciatic nerve. These axons run from the base of the spine to the big toe of each foot, and can extend up to a meter in length.

This paper attempts to get a measurement of the conduction velocity of the sciatic nerve: 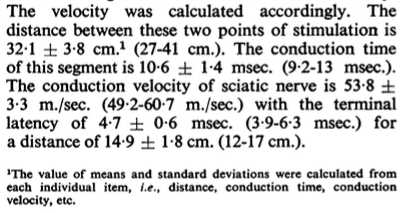 Regarding axons within the brain, I'll be honest by saying that I don't know - you could wait for someone with knowledge about that to help answer your question. The nervous system is usually looked at as a whole. As far as the longest neurons in the brain are concerned, they are - as far as I have read - the Betz Cells in the primary motor cortex. However, that shouldn't be too useful as we are interested in inter-neuronal travel of electric impulses (or too useful even otherwise), done primarily through axons / nerve fibers. Furthermore, since I have mentioned nerve fibers (myelinated axons), you should also pay attention to insulation of the axonal membrane via myelination. Under- or over-myelination is also proportional to conduction velocity.

3
How do we localize pain?
7
How does it come about that specific areas of the brain are associated with specific functions?
3
How many possible states does a brain have?
3
link between top-down (bottom-up) processing and cortex layers
5
How far can a signal travel in the neocortex without passing through the white matter?
6
How is the brain cooled?
4
If the optic nerve transmits to both hemispheres, how do split-brain experiments work?