Are the language and sound centres of the brain in the same area?

I am an English major currently taking a Psycholinguistics module. One of the things we learned is that speech perception is handled differently from non-speech sound perception. Our brain is trained to break down speech signals more intricately than non-speech information, which is why we are able to distinguish syllable and word boundaries.

Since speech sounds are perceived differently than general sounds, my question is this: do different areas of the brain light up when speech is perceived as opposed to a general sound?

I've spent a few hours Googling this, but I found no answers. The only thing I found is that a particular section of the temporal lobe is responsible for auditory perception.

Background
The primary auditory cortex is engaged in the low-level processing of sound. For example, it contains a tonotopic map that is used to separately process the various frequencies in the incoming sound (Purves et al., 2001) (Fig. 1).

The language area involved in production of speech of the brain is called Broca's area (Fig. 1) and is anatomically distinct from the primary auditory cortex.

The part of the brain dealing with understanding speech is Wernicke's area (Fig. 1), and is also a distinct anatomical structure in the brain.

The angular gyrus has also been associated with specific speech production pathologies (Fig. 1). 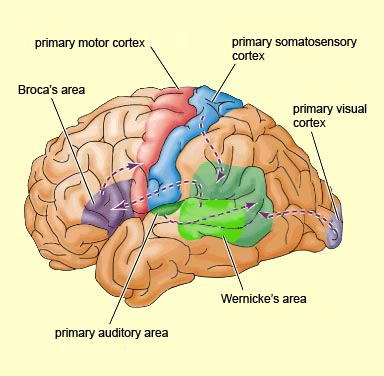 Not the answer you're looking for? Browse other questions tagged cognitive-psychology neuroscience neuroanatomy or ask your own question.

6
Does every human brain have the same shape?
1
Why is Wernike's area of the brain called Wernike's area?
3
Where are intrinsically bursting neurons found in the mammalian brain?
4
Are axons in the brain weighted?
4
If the optic nerve transmits to both hemispheres, how do split-brain experiments work?
0
What is the difference between the processing of visual information and auditory information?