Is there a region of cortex which over a period of development becomes the seat of self?

Mountcastle's hypothesis, which is based on the observation of uniform cortical anatomy, suggests that the there might be a uniform cortical "algorithm". The only reason that some cortical regions seem to be specialized for particular functions, like vision, hearing, etc. is that they happen to be connected to corresponding sensory input. The ferret sensory input rewiring experiments confirms this hypothesis (rewiring auditory cortex in ferrets to receive visual input, lets them see just as good).

Regions of the cortex which are not connected directly to any sensory input listen in on the broadcasts that are sent by neighboring regions, either directly or through the thalamus (which is currently thought to be some sort of relaying mechanism) and do further transformations and refinements at a more abstract level. For example in the case of vision, it is known that the primary visual cortex, V1, consists of a sheet of cells/columns that are sensitive to edges oriented and/or moving in particular directions. The "higher" regions of visual cortex, take the output of V1 and further process it. Neurons in V4, for example, are known to be sensitive to objects like a chair or a dog or your grandmother. Much of this is discussed in detail by Jeff Hawkins in On Intelligence where he speculates that cortical regions are connected up in a hierarchy something like: 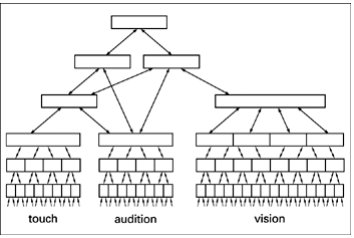 Hawkins, however, does not talk much about that top level region, and only makes a passing speculation that it might be the hippocampus. But, it seems to be screaming at you, that whatever it is, it must be the seat of the self.

Googling on these ideas led me to Cartesian Theater, a term that philosopher, Daniel Dennett derisively uses to refer to the idea that there is a central place in the brain, where everything comes together. For example, in the Multiple drafts model Dennett says:

"The multiple drafts model of consciousness was developed as an alternative to the perennially attractive, but incoherent, model of conscious experience called Cartesian materialism, the idea that after early unconscious processing occurs in various relatively peripheral brain structures "everything comes together" in some privileged central place in the brain, which one might call the Cartesian Theater -- for "presentation" to the inner self or homunculus. There is no such place in the brain, but many theories seem to presuppose that there must be something like it."

However, I didn't find his arguments very compelling.

Given that there are regions of cortex that are dedicated to vision, sound, touch processing, etc., is there a region of cortex, that listens to only the final assembled portions from several "lower" regions of cortex, which then over a period of development (by age 1.5?) becomes the seat of self?

If this is the case, Dennett's criticism of the Cartesian Theater and a 'homunculus' observing it is outdated.

I believe the source of all the homunculus confusion to be the little green homunculus in Men In Black I, and Daniel Dennett's use of this imagery to caricature any argument for a region in the brain where everything comes together and therefore being the seat of the self.

In essence what I'm saying is that only a small subset of the brain is the seat of consciousness, the reason being that large portions of the cortex seem to essentially be doing pre-processing steps. For example, V1 the largest area of the cortex seems to be assembling the visual field from the split up portions coming from the eye via the LGN in the thalamus.

This by itself does not lead to an infinite regress, as the problem (of making sense of the world) is simplified a lot after all the pre-processing steps.

Another way of putting my point is via the following simple analogies:

Some more clarification on the homunculus fallacy confusion: Almost everyone agrees that no fallacy whatsoever is being made by saying that the brain is the seat of consciousness (SoC). Similarly, no fallacy is made merely by claiming that a subset of the brain is the SoC. A homunculus fallacy is made if it is further claimed that by identifying the SoC, an explanation of consciousness has been given. As Dennett rightly says, an explanation of consciousness should not contain components that are themselves fully conscious. Doing so only postpones the problem and leads to infinite regress. In my question's background, I'm not trying to imply that I have explained consciousness, all I'm saying is that there is evidence that only a subset of the brain is the SoC, and this SoC could be regarded as being at the center of a Cartesian theater. And of course, instead of light and sound being projected/played in this theater, there are only streams of neural spikes, representing light, sound, etc. in transduced form.

Modern homunculus arguments don't assert that there is physically a little man in your head. This would be a completely vacuous argument, and nobody would make it in the present day. When people make the homunculus fallacy today, they usually do it in the same fashion as you do: all the sensory information is assembled 'somewhere' and then 'some brain region' perceives it. It is an infinite regress in the sense that you didn't explain how perceiving is done, you just delegated it to a region of the brain you don't understand well. This is the same as Descartes believing that the 'seat of the soul' is the pineal gland. Except you replaced that gland (which we understand relatively well) by another region of the brain that we understand less well. Notice how this has no explanatory power. Not only that, it can be experimentally falsified (to a certain extent)!

It is hard to study consciousness scientifically because no one has given it a good operational definition. However, most discussions of consciousness talk about things like qualia or basic subjective experiences. One of the most common ones discussed is the experience of colour.

Physics does not have colour, it just has a continuous spectrum of wavelengths. Even when you look at the sensitivity of the 3 types of cones in the retina it is not discrete, but continuous. The categories of colours (i.e. "that's red", "that's blue") are produced by perception and these discrete-ish categories form the basis of colour qualia. Scientists can study these categories by asking participants if various stimuli feel like the same colour. What is known, is that the arbitrary boundaries of the categories people draw between colours is language dependent!

This tells you that the 'linguistic processing' and 'colour processing' regions of the mind interact to produce the qualia of colour. In other words this is a piece of evidence in support of the Whorf hypothesis: language effects your subjective conscious experience. This might seem like support for integration and higher level perception by a single region, but there is a kicker.

Gilbert et al. (2006) showed that the Whorf hypothesis is supported in the right visual field but not the left. In other words, when I present colours in one part of your visual field, you experience them one way and when I present them to the other then you experience them in a fundamentally different way. The right visual field integrates with your linguistic processing and the other doesn't. Hence, you can't localize the qualia of colour to either the right or left hemisphere. They both experience them and this is usually not perceivable to us without a controlled experiment.

Simply put, there is no reason to believe that all sensory experience is somehow synthesized and presented to a 'seat of consciousness'. Unless you are willing to make the tautological statement that the 'seat of consciousness' is the whole brain (or almost all of it). This is consistent with most modern formal approaches to consciousness that model it as highly distributed over the whole brain, with no single 'seat'. For more info, look at the answers on the following question:

46
Why would the brain flip the images perceived by your eyes?
52
What are current neuronal explanations and models of 'consciousness'?
18
Is it possible for certain people to perceive colors differently?
7
Where is the visual "image" that we "see" finally assembled?
2
What is our higher self?

5
Does each sensory neuron type have a characteristic spike sequence pattern?
6
What is the brain power devoted to vision and haptics?
8
How are qualia localized in consciousness?
5
Are emotions local or purely global? Can there be two inconsistent emotions in different parts of the brain?
1
Which characteristics of neural activity patterns underlie conscious experience?