What are 'gap junctions' (electrical synapses) for?

I was reading this and I found the following sentences:

Apart from chemical synapses neurons can also be coupled by electrical synapses, so-called gap junctions. Specialized membrane proteins make a direct electrical connection between the two neurons. Not very much is known about the functional aspects of gap junctions, but they are thought to be involved in the synchronization of neurons.

Do we really know very little about the functional aspects of gap junctions? And how are they involved the 'synchronization' of neurons?

Gap junctions can couple cells directly electrically. Cell types electrically coupled via gap junctions include neurons, the pancreatic islets of Langerhans (Andreu et al, 1997) and cardiac cells (Fig. 1.). In contrast to chemical synapses, information transfer via electrical "synapses" (gap junctions) is nearly instantaneous. In chemical information flow, the synapse is the rate limiting step, because it depends on the passive diffusion of neurotransmitters across the synaptic cleft. 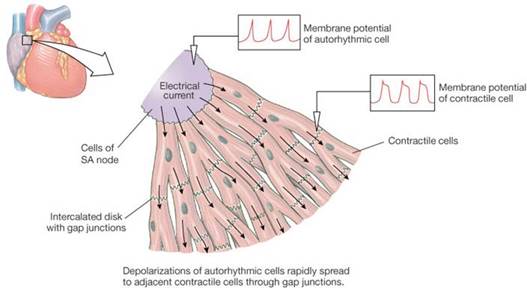 Moreover, in a structure such as a brain nucleus many cells can be coupled. In other words, if all cells in a tissue contain gap junctions, all these cells are directly electrically coupled, not just those cells directly touching each other. In a way, all cells in such a tissue are in open connection with each other. This means that when one cell fires, it can theoretically activate all the connected cells to fire an action potential in near-synchrony.

Hence, gap junctions allow for synchronous activation of inter-connected neurons, both in the spatial and temporal domain.

While this can be the preferred mode of operation of firing in some neuronal structures such as the olivary nucleus (Leznik & Llinás, 2005), it can theoretically lead to trouble in case pathological synchronization is established, leading to epileptic activity (Dudek, 2002).

18
Is serotonin conclusively linked to depression?
5
What's the relation between firing of dopaminergic neurons and dopamine dispersion in terms of neurophysiological processes?
2
What electrical stimuli do brain implants use?
3
Are inhibitory synapses governed by different chemicals than excitatory synapses?
4
Integrated Information Theory - If correct could humans create artificial consciousness?
2
What information does the connectome actually contain?
0
Principles of grouping neurons