Predictive Experiments on Neuroscience of Free Will

It seems to be very interesting that we can use modern neuroscience and cognitive science research to inform us about the ages-old question of free-will vs. determinism. The standard experiment was done by Benjamin Libet in 1983 that demonstrated that electrode activity showed that in terms of using our left or right hands - electric signals showed a significant change in activity before the reported decision to make the movement was made. This is one of the founding experiments of the neuroscience of free-will.

However, it seems that this experiment informs us in a very limited temporal duration. Since I could not find any conclusive results myself, I wanted to ask if they were any neuroscience experiments that demonstrated long-term predictive behavior. An example would be if a person with a particular imaged localized area could be said pre-hand to have a certain behavioral reactions in response to stimuli. This would defend give a strong defense to the determinist philosophical position. Of course, I'm talking about conscious reactions (such as decision-making in social situations, since the idea is that people consciously think they make their own decisions). An experiment involving unconscious processes such as memory would not be very informative.

Which experiment(s) comments on this?

What is the degree of validity of the experiment? (Summary of Methods and Results)

Are the results controversial? Does it truly make a comment on the philosophy of free will?

If not, is it that Neuroscience is still not mature enough have predictive power like hard sciences such as biology, chemistry and physics. After all, the brain is a incredibly complex organ, and responding to complex multimodal stimuli (e.g. social situations) it would further complicate the possibility of any such study.

There is a good article on Wikipedia on the Neuroscience of Free Will, with far too much content to adequately summarize here. Since your question is focused on long-term prediction of behaviour, I'll just mention about that.

Using newer fMRI technology, Soon et al (2008) used a learning algorithm to predict "free will" decisions from brain activity about 7 seconds (and up to 10 seconds) prior to the subject reporting awareness of having made the decision. This experiment has been replicated in other labs: Presenter Marcus du Satoy undergoes it for the BBC documentary The Secret You (2009/2010), and remarks that there is something creepy about the radiologist being aware of his decision several seconds before even he is. 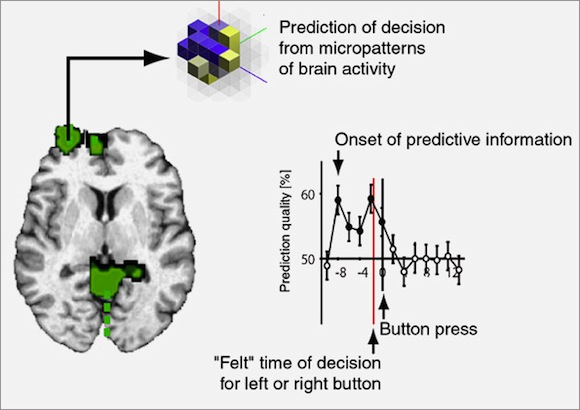 An important question remains regarding all long-term prediction experiments: Human behaviour is very predictable, as countless experiments in every area of psychology commonly demonstrate by manipulating causal factors - the ability to predict it well in advance with significant accuracy is hardly limited to neuroscience. So experiments have to be very carefully designed if they are to eliminate the effects of predisposing factors such as priming in decision-making, such that decisions are not influenced by uncontrolled unconscious factors (hence truly "free will"). However, if "free will" doesn't exist, then eliminating all predisposing factors will ultimately prove futile, so until researchers can control for all variables, some doubt will always remain.

Nonetheless, research in this field has significantly changed our understanding of the role of "thought" or "will" or "volition" in the causal chain, such that they now appear to be a side-effect rather than cause of physical action.

Here is a recent review of the topic:

Not the answer you're looking for? Browse other questions tagged neuroscience brain-waves free-will or ask your own question.

4
Computational Neuroscience software
6
Classic cognitive neuroscience studies that highlight conclusions that could not be drawn from behavioral experiments
4
Are Free Will and Motivation related?
4
If the optic nerve transmits to both hemispheres, how do split-brain experiments work?
5
What sources of randomness does the brain use for sampling?