How do you analyse visual analogue scales with an ambiguous response?

For example, I might ask participants to complete a visual analogue scale for pain. They would be given a line that is 100mm long, and one end says 0 (No pain) and the other end says 100 (worst possible pain). The participant is asked to make a mark on the line with a pencil or pen to rate their level of pain. I would then use a ruler to measure the distance from the origin. E.g. how many millimeters away it is from the start of the line (i.e. zero).
The problem is that many times, people do not place a mark such as an x on the line, but they might circle a part of the line, or put a tick (check mark) there instead. I attach a picture of the standard response (participant 1) followed by 5 possible scenarios where the answer is ambiguous (participants 2 to 7), so I have left it as missing data/blank. Should these be excluded from the dataset (coded as missing data) or are some of them salvageable? 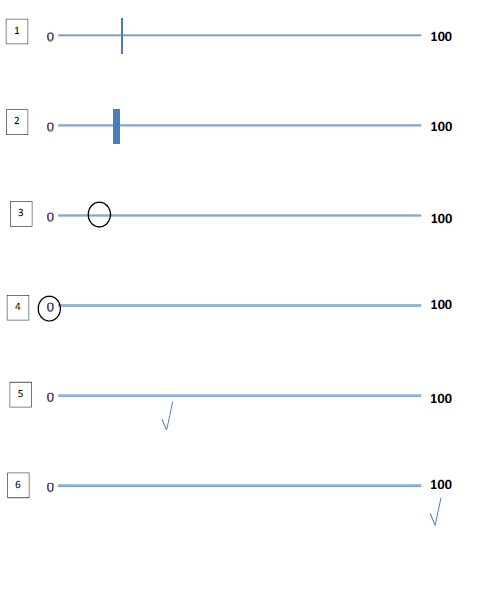 I fully agree to AliceD's thoughts. If you have a large sample, these problems might add a little noise, but won't make much of a difference (certainly not the cases 2, 3, and 5, because the psychological resolution of the scale is unlikely to be as precise as the millimeter measure suggests anyway).

In addition: If you want to be sure not to introduce any systematic bias yourself, the most prudent procedure would be to code this blind to conditions (if you have any) or other measures of the study. This way you can avoid that you unwittingly help you own hypotheses.

I am not an expert on these scales, but my 2-cents worth would be the following, which are simple work-arounds to include all the data:

Points #4 and #6 are obviously the most risky, especially in a small population. In a large population (say N=100) a few outliers don't matter too much. So in case the study sample is small, you may want to consider excluding uncertain cases (#4 and #6 as examples), or try to contact the subjects and re-assess.

Not the answer you're looking for? Browse other questions tagged measurement methodology data or ask your own question.

9
Are presence questionnaires valid in a between-subjects design?
8
Analyzing control questions data for a survey
8
What paper discussed the cognitive properties of Likert/visual analogue scales in ratings?
1
does getting top marks and ranks in school or college make one intelligent?
5
Can we use a scale even if one of the answer levels was not added?
1
Platforms to make online experiments with counterbalancing
0
Impact of pre-college schooling on IQ (WAIS)?
7
Which function to use for fitting learning curves?