How long does it take to learn to cane travel?

How long does it take the average person (either sighted or blind) to learn to use the guide cane successfully for mobility purposes? 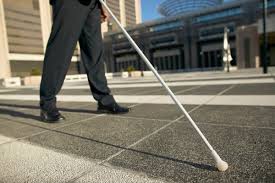 Because required training times will depend on many individual specific factors, such as willingness of the subject to undergo an arduous training program, age, possible additional disabilities, IQ/education etc., the best answer would be an average training time in a group of subjects that learned to use the cane from scratch (i.e., naive subjects at the start of the study). Ideally, it would be an answer expressed in hours of training time, because some measure expressed in weeks or months cannot easily be translated in how much time was actually spent on cane training. For example, the National Federation of the Blind (NFB) of extreme cases (very swift learners and non-learners), but anecdotal sample cases telling me that person A mastered it in a few weeks and person B not at all, isn't too helpful, unfortunately (I would like to refer to numbers in a manuscript I am preparing).

Ideally, the source should be a scientific publication, or obtained from a credible source, such as the NFB. I have been searching quite a bit, but without success.

Background
Based on an article from a guide cane instructor who is a cane traveler himself, I can answer the question as follows:

First off - it depends on at least three important variables;

Ad. 1 : If the student is planning only to use the cane in already familiar environments, the process will be easier. Fear of traffic, or unfamiliarity with it may complicate the learning process.

Ad. 2. The level of independence is important; an older persom who has been used to be guided by another, sighted person for years will have a hard time replacing those two eyes with a cane. A youngster, on the other hand, will likely be able to learn faster, be more motivated and more daring than an old person. The elderly may be less mobile and possibly afraid of falling, have balance disorders etc.

Ad. 3. Time should be measured in two ways: the number of hours per day and week, and the number of months to be filled with this schedule. The author of the cited article below started as a student spending fifteen to twenty hours a week in guided practice and that worked well for her. The author says to have known people who made good progress with four to five hours of guided practice in a week, anything under three hours per week is probably getting rather thin; and these hourse refer to specific skill practice, besides using the cane wherever and whenever possible.

The author spent an intensive six weeks on travel to reach a satisfactory level of skill. Most people he knows who worked steadily for several hours a week, plus out-of-class everyday use were able to gain sufficient skill to cane travel in two to three months when starting as a beginner.

Not the answer you're looking for? Browse other questions tagged learning vision sensation perceptual-learning or ask your own question.

13
How does the brain learn what something is for the first time?
1
How does the brain learn abstract maths?
4
How do humans learn to combine tasks?
5
How does an animal learn what a predator is?
5
How long does the trace of a memory last in the brain?
4
Can you learn a skill by observing someone else?
1
Can we learn to adapt to image-reversal when being intermittently exposed to them?
5
Can one learn not to panic? How?