How do neurons decide how to alter their output signals?

In computer science, neural networks are trained using backpropagation and other methods. Backpropagation heavily relies on mathematical formulas to describe how the weights should be changed throughout the network to effect the final output of the system. Biological neurons need to be able to adjust as well, if I'm not mistaken. What happens within a neuron to cause it to adjust its output? In other words, are biological neurons "trained" and if so, what is the process behind it?

To my knowledge, there is no evidence for back propagation in the brain. If you're interested specifically in that topic, Geoffrey Hinton (Dept. of CS @ UofT) has written about it. I'll try to focus on the biology.

Some basic neurophysiology first. Neurons have a slightly negative electrical resting potential (prototypically ~-70 mV). When they fire (following depolarization) this increases. As you may guess, they can also hyperpolarize (less potential to fire an impulse). As you may also be able to guess, other neurons in the network can influence one another to make them more or less likely to fire. This, and indeed most, neuron-neuron communication occurs at synapses. A synapse is a small gap between the presynaptic neuron and postsynaptic neuron, as you're likely already aware. Respectively, these correspond to an axon (sending a signal) and a dendrite (receiving a signal). Long story short, when depolarized the presynaptic neuron releases neurotransmitters (NT) which are received by the post synaptic neuron. This results in changes in concentration of ions in the postsynaptic neuron (inside vs. outside of the neuron). This can result in the postsynaptic neuron firing itself. The ions primarily implicated in this are Sodium (Na+) and Potassium (K+), transduced though ion specific Na+ and K+ ion channels in neuronal membranes.

One of the most critical ions related to your question, however, is Calcium (specifically, Ca2+). This ion often acts as an intracellular messenger, that is when it is 'let into' the cell after that neuron receives an impulse, it activates biochemical processes inside the neuron, e.g., to produce more of a protein.

How neurons actually learn has been a difficult problem to model. We know that neurons can potentate, that is a neuron can come to exert more control over the firing of another neuron. Indeed, it has been known for a long time that firing neurons strengthen connections. The famous aphorism for this is "neurons that fire together, wire together" (coined by the brilliant scientist Carla Shatz, now at Stanford). The problem is that if neurons just kept getting stronger, it leaves no room for information to be 'unlearned', which it is obvious it can be, for new information to be added to the system, or, indeed, information to ever be really learned at all. You'll see why in a moment.

One attempt to model the problem of neuronal learning is Beinenstock Cooper and Munro (BCM) Theory. Its basic proposition is that a connection that was once weak can become strong (and vica versa). Specifically, what it attempts to model can be thought of as follows:

Imagine we have three stimuli (e.g., red, green, blue) and three cells. Before much exposure, all of these neurons respond ~equally to each of the stimuli (colors). After exposure the neurons respond differentially, that is neuron 1 might respond strongest to red; neuron 2 to green; and neuron 3 to blue. We might call this 'learning' because we wittness an increase in responding to a stimuli but also -- and this is critical -- a decrease in responding to other stimuli.

Biologically, one heavily implicated mechanism in this process is the N-methyl-D-aspartate receptor (NMDAR). Following binding of glutamate (a NT), this receptor allows Ca2+ into the postsynaptic cell. This animates intracellular events that result in either potentiation (typically in the form of Long Term Potnetation [LTP]) or depression (typically in the form of Long Term Depression [LTD]). In short, an increase or decrease a presynaptic neurons' ability to exert control over the postsynaptic neuron.

Critically, there is a modification threshold. This is the point at which LTD turns into LTP. This is represented by the greek letter theta (θ). BCM theory proposes a shifting threshold. If a synapse gets very strong, then θ shifts such that it becomes difficult to strengthen the connection further and easier to weaken it. Likewise, if a synapse becomes very depressed, θ will shift to allow it to more easily become potentiated and harder to weaken it.

For example, graphically you can visualize potentiation as the threshold shifting to the right. That is, the amount of Ca2+ that would have produced potentiation, now produces depression. The reverse, obviously, can also happen.

As you can see, what we've arrived at is something that looks rather computational. While I am not aware of a truly precise mathematical description of this process, it is obvious that such a description is, in principle, possible. You can see the math. proposed currently here (it seems implausible it could be that simple to me...and the assumptions made seem daft, but that's just my own commentary). There are precise models of neuronal potentials and people are trying to put BCM (or something like it) into very precise terms. As you can image, this is extremely difficult because of the complexity of the biology, especially what Ca2+ is actually doing in the cell. In many ways, that is still a black box although we're learning about it at a very rapid rate.

In closing, biology seems to have solved the problem of learning very differently than computer scientists. As someone with both a mathematics and neuroscience background, I find the fact that this is possible to be simply incredible.

Short answer
Neurons can increase or decrease the amplitude of their response. A neuron's response strength can be regulated by adjustment of the cell-surface expression of excitatory receptors.

Background
First off, this question is very broad. To narrow it down I will focus on learning processes in the hippocampus involving long-term potentiation (LTP). LTP in the hippocampus is thought to be an essential feature of learning. Much of the work on LTP has focused on the synaptic connections between the Schaffer collaterals and CA1 pyramidal cells (Fig. 1). 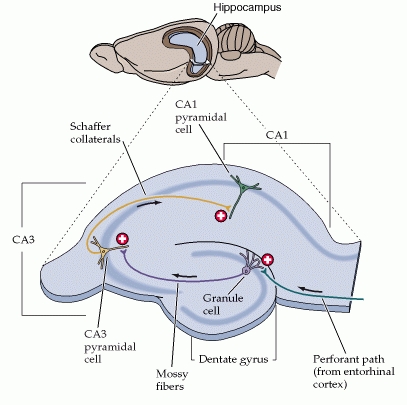 Electrical stimulation of Schaffer collaterals generates excitatory postsynaptic potentials (EPSPs) in the postsynaptic CA1 cells (Figure 1). If the Schaffer collaterals are stimulated only two or three times per minute, the size of the evoked EPSP in the CA1 neurons remains constant. However, a brief, high-frequency train of stimuli (a tetanic stimulation) to the same axons causes LTP, which is evident as a long-lasting increase in EPSP amplitude (Fig. 2). LTP also occurs at many other synapses, both within the hippocampus and in a variety of other brain regions, including the cortex, amygdala, and cerebellum (Purves et al., 2001). 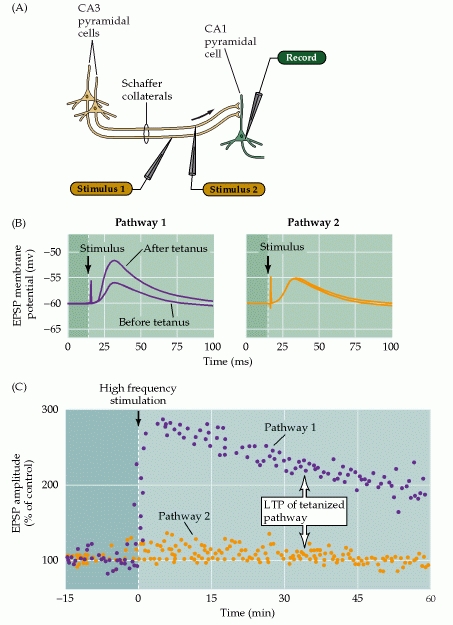 Fig. 2. LTP. Long-term potentiation of Schaffer collateral-CA1 synapses. (A) Recording of synaptic transmission. Two stimulating electrodes (1 and 2) activate Schaffer collaterals. (B) Left: Synaptic responses recorded in a CA1 neuron in response to single stimuli of synaptic pathway 1, minutes before and one hour after a high-frequency train of stimuli. The high- frequency stimulus train increases the size of the EPSP evoked by a single stimulus. Right: Responses produced by stimulating synaptic pathway 2, which did not receive high-frequency stimulation, is unchanged. (C) The time course of changes in the amplitude of EPSPs evoked by stimulation of pathways 1 and 2. High-frequency stimulation of pathway 1 causes a prolonged enhancement of the EPSPs in this pathway (purple). This potentiation of synaptic transmission in pathway 1 persists for several hours, while the amplitude of EPSPs produced by pathway 2 (orange) remains constant. Source: (Purves et al., 2001).

For LTP to occur, both pre- and postsynaptic neurons need to be active at the same time, because the postsynaptic neuron must be depolarized when glutamate is released presynaptically. This has to with the need to overcome the Mg2+ block of NMDAR receptors. NMDA receptors are regulatory receptors that allow Ca2+ to enter the cell. Ca2+, in turn, can affect important regulatory processes in neurons, such as receptor expression. As a consequence of coincident depolarization and glutamate binding, calcium influx (through NMDARs) is maximal, which activates intracellular signaling cascades that ultimately are responsible for the altered synaptic efficacy. NMDAR-dependent LTP is therefore an associative form of plasticity and fulfills the criteria for correlated activity.

Conversely, long-term depression can be induced by repeated activation of the presynaptic neuron at low frequencies without postsynaptic activity. Because the driving force for Ca2+ is very large for a neuron at rest and the block of NMDARs by Mg2+ is incomplete even at resting potentials, significant Ca2+ enters the cell in response to synaptic stimulation during low-frequency synaptic stimulation. Presumably it is repeated occurrence of this smaller NMDAR-dependent Ca2+ influx that triggers LTD induction (Lüscher & Malenka, 2012).

Not the answer you're looking for? Browse other questions tagged neuroscience learning neurophysiology or ask your own question.

9
How is epigenetic memory expressed in neurons?
4
Hebbian Learning - Understanding Simultaneous Firing
2
What is the purpose of non-spiking and anaxonic neurons?
2
How do neurons limit their input current?
6
Are there bidirectional neurons?
2
get signal from eye neurons
3
Can an axon connect to dendrites of multiple other neurons?
4
Integrated Information Theory - If correct could humans create artificial consciousness?
2
Understanding the 'Wiring Catastrophe'