Homer: But every time I learn something new, it pushes out something old. Remember that time I took a home wine-making course and forgot how to drive?

Marge: That's because you were drunk.

Yeah, but all jokes aside, when all other conditions are equal, does memorising a new thing increase the chance of losing existing memories that are not directly related to the new memory (different subjects)?

Although this is quite an old question, I thought I would add additional information regarding this topic for consideration.

As already noted, the storage capacity of the human brain is certainly very impressive. However, there are also some interesting quirks to human memory worth noting.

does memorising a new thing increase the chance of losing existing memories that are not directly related to the new memory (different subjects)?

No -- and in fact, when something approaching the phenomenon you are describing occurs, quite the opposite appears to be true.

Before I clarify this, it's important to note that one should not think of memory as something that is "lost" in the same way that one might record over a VHS cassette tape and lose the old content in the process.

When one encodes new information ("learns a new factoid"), there is a greater chance of that new information adversely affecting their ability to retrieve and recall semantically related memories.

Memory interference is more likely to occur with similar material than different material.

Two main types of interference are thought to affect memory:

In effect, what you might observe is precisely the opposite of what you are suggesting in your original question: when you memorise information about a "different subject" you are in fact less likely to "lose existing memories" relative to memorising information about the "same or similar subject".

Again, it's important to recall that you're not actually overwriting or erasing the older memories, but more likely merging them together and confusing them with other memories.

This has relevance to how one might chose to structure their learning e.g. revise for exams. After revising organic chemistry, one might derive greater benefit from subsequently revising a foreign language, rather than say, following it with inorganic chemistry.

So, as it relates to your Simpsons reference, the following would be more likely to be correct:

Remember that time I took a home wine-making course and forgot how to drive brew beer?

Below is a screenshot from a introductory psychology textbook detailing describing the role of interference in forgetting. It also refers to empirical research supporting the phenomenon: 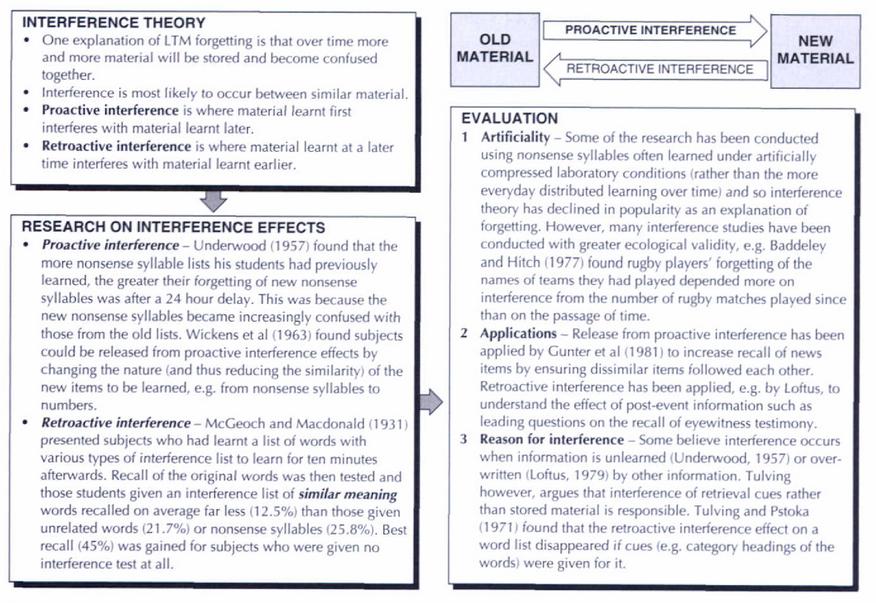 From: "A Level Psychology Through Diagrams" By Grahame Hill (My apologies, I had to use my undergrad textbooks in a bonfire when I was homeless and had been reduced to eating catfood)

This is true if you do have a hard disk of 20GB, but the human memory is large enough.

You might have only a few gigabytes of storage space, similar to the space in an iPod or a USB flash drive.

Yet neurons combine so that each one helps with many memories at a time, exponentially increasing the brain's memory storage capacity to something closer to around 2.5 petabytes (or a million gigabytes)

3
Is our memory accumulative or replacive?
0
Why can't we remember being babies?
1
Polylinguistic Competition
2
What is the limit of human memory?

3
A type of long-term memory where I can remember full dialogues
7
Is it possible to erase problematic memories?
3
Are new memories stored in new neurons generated in the hippocampus?
6
Can suggestion change memories?
5
Why do some memories stick out more than others?