Is the logic of “Herrnstein's syllogism” sound, and are its premises true?

My theory hinges on an argument in the form of a syllogism: 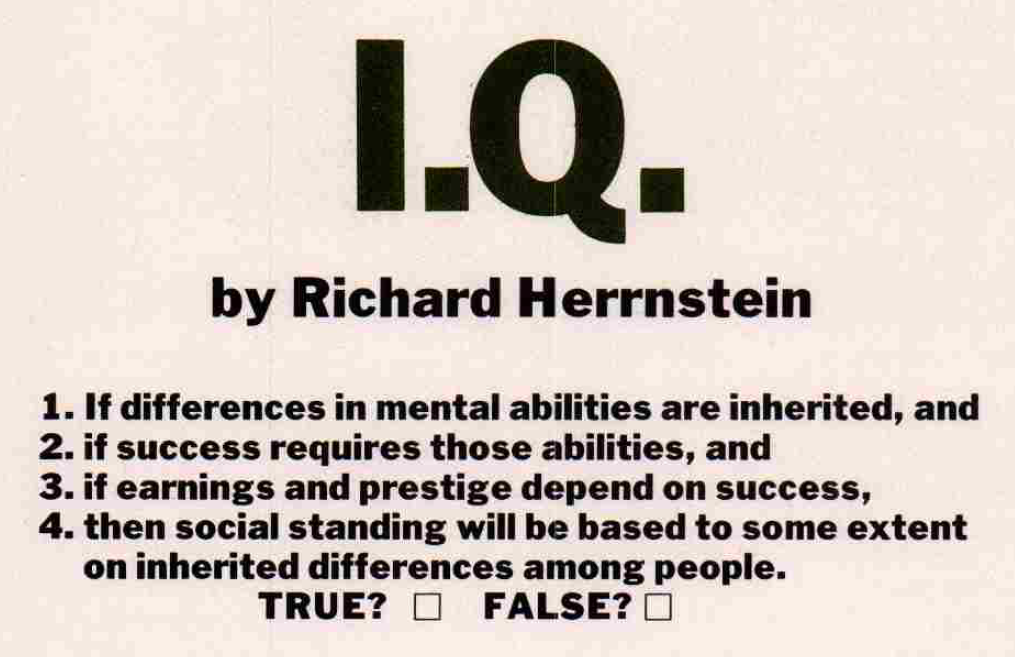 Herrnstein's Syllogism, as shown above, comes from the 1971 article written for The Atlantic by psychologist Richard Herrnstein (Herrnstein, 1971). It argued that while socioeconomic status of individuals may be caused by various factors, one of those factors must be differences in inherited genetics. The article ignited a big controversy.

As a personal note, I must admit that I don't quite understand the controversy (Well, at a scientific level). It was already accepted by most psychologists in the 1970s that general intelligence was a heritable trait. Further, it was accepted that general intelligence statistically predicted success in education as well as in professional life. Therefore, it should not be surprising if genetic differences acting on intelligence would not be distributed evenly across the social environment.

I will first deal with the premises. Is general intelligence heritable? Then I will merge the two next premises. Does intelligence predict mobility in success and social standing? I will also look directly at the conclusion of the syllogism. Do differences in genetics that influence differences in intelligence vary as a function of socioeconomic status?

Was Herrnstein's conclusion scientifically justified back then? That could be argued, but ultimately it doesn't matter. Today we have much more evidence available. We can now directly look at molecular genetics that is known to influence intelligence. As I will show, the best current evidence absolutely supports Herrnstein's conclusion. This does not mean that intelligence is everything, or that genetics is everything, but that it is a part of the story.

Is intelligence, educational success and similar variables partly heritable traits? In fact, this is not even questioned by the relevant experts anymore. From a landmark Nature editorial (2017), I quote:

it’s well established and uncontroversial among geneticists that together, differences in genetics underwrite significant variation in intelligence between people.

In an expert review on five findings regarding genetics and intelligence, the first noted finding is the heritability of intelligence (Plomin & Deary, 2015).

The question remains: how do we know that intelligence is partly heritable? Quantitative genetics is a field which attempts to address such questions. In particular, methods have been developed that attempt to estimate aggregate genetic influence without finding the influence of particular genetic variants.

The most highly used method for humans is the twin study. Identical twins are more genetically similar than fraternal twins. Identical twins also tend to be more similar than fraternal twins on various variables such as facial similarity, height, and even on psychological variables. From this increase in genetic similarity coupled with the increase in phenotypic similarity, an estimate of heritability can be calculated. This method can be extended to compare not just similarities between twins, but in general siblings of all kinds, cousins and more in pedigree studies. For example, based on a massive Dutch birth cohort a team of researchers estimated a heritability of educational achievement of 85% (Schwabe et al, 2017).

Another method is the adoption study. This method compares the correlations of children with their adoptive parents and with their biological parents. Based on this an estimate of heritability is calculated. Adoption studies show substantial genetic influence on intelligence (McGue et al, 2007). One of the most powerful variants of the adoption study is a study that compares the similarity of identical twins separated at birth and reared apart. For example, the Minnesota Study of Twins Reared Apart found a very high heritability estimate (Bouchard et al, 1990). Identical twins are highly similar in intelligence regardless of whether they are reared together or not.

These are classical methods of estimating heritability, yet more and newer methods have been developed. Genome-wide Complex Trait Analysis (GCTA) estimates narrow-sense heritability by directly quantifying the chance genetic similarity of unrelated strangers and comparing it to their measured similarity on a trait. A study of approximately 20,000 individuals found a substantial heritability of general intelligence with this method (Hill et al, 2018). In general, based on this finding and all the other findings together, one can conclude that genetic similarity is a better predictor of similarity in intelligence than environmental similarity is. For example, identical twins reared apart are much more similar than adoptees raised together.

There are far more studies one could cite, and other lines of evidence. For example, inbreeding has been shown to lower intelligence, and this effect is larger the higher degree the inbreeding is (Fareed & Afzal, 2014). This should only be viewed as a snippet of the evidence from which researchers conclude that it is "uncontroversial" that genetics influence intelligence.

One thing is to estimate the aggregate genetic effect; another thing entirely is to find the actual genetic variants at play. This is done using genome-wide association studies (GWAS). It has been found that intelligence is a highly polygenic trait, meaning that it is influenced of many genes each of very small individual effect. This means that huge sample sizes are required to unlock the individual variants that affect the trait. However, in the last few years, GWA studies have found many variants affecting intelligence, see e.g. (Savage et al, 2018). By aggregating the effects of many of the variants thought to affect the trait one gets a polygenic score, such that a higher polygenic score is associated with higher average intelligence. Of course, most of the genetic variants have yet to be found, and hence only a moderate portion of the variance in intelligence can be captured directly by molecular genetics currently.

It can be difficult to establish causal effects in the life sciences. Does a correlation between higher pay and higher intelligence mean that higher pay causes higher intelligence? Or how about vice versa? Or is a third variable at play? One of the best ways of providing causal evidence is through longitudinal studies. For example, measure the intelligence of a sample at age 11 and see if that predicts later success.

General intelligence has been found to be a big predictor of job success, especially in jobs of higher complexity (Gottfredson, 1997; Schmidt, Oh & Shaffer, 2016).

We already know that intelligence is highly heritable, and hence these effects are expected to be partly due to genetic differences. Yet, some posit that these effects may be due to some socioeconomic variables that are not controlled for.

Testing this hypothesis is possible with within family sibling analysis. By restricting studies to only look at the outcomes of intelligence differences between siblings who are raised together, one can establish that these effects are not due to different rearing environments. In fact, restricting analyses to siblings only slightly changes the associations (Murray, 2002). The study on the origins of inventors mentioned above similarly does a brother-only comparison, and they conclude "This suggests that these coefficients capture an effect of IQ on the probability of inventing which is largely independent of unobserved family background".

Taking the two previous sections together, I don't see a plausible way in which it would not be the case that genetic variants influencing intelligence would distribute unevenly across socioeconomic lines. However, today we have far more direct evidence in the form of molecular genetics. As I already alluded to in the section on genetic influence on intelligence, we now know many variants influencing intelligence. From the DNA of an individual person one can then sum up the effects of the variants into a polygenic score associated with that individual. Indeed, as I will show, these polygenic scores have been show to predict various outcomes and have been shown to not be distributed evenly (which is exactly Herrnstein's conclusion in other words).

It is well known that students of some schools do better on average than students of other schools. But the question remains: is it because of the schools? Studies already referenced earlier showed strong evidence that individual factors account for the largest amount of variance. In a large sample of students from different types of schools, a team of researchers found that indeed students do better in more expensive private schools. However, once they controlled for various pre-selection factors there remained no statistical difference. In other words, they did not find evidence that it was because of the schools that the students did well, but rather the schools had selected students who already were good. But furthermore, they found that differences in exam performance between the schools mirrored the genetic differences between them. That is, they found that pupils attending expensive selective schools had higher polygenic scores on average (Smith-Woolley et al, 2018).

Intelligence has been shown to predict later wealth as shown in the previous section. However, whether this is partly due to genetics can be tested directly be examining whether polygenic scores predict later wealth. A large sample study examined exactly this and they concluded that "genetic endowments linked to educational attainment strongly and robustly predict wealth at retirement" (Barth et al, 2018).

Lastly, do longitudinal studies show that polygenic scores predict upward social mobility? A major study on this was recently published. They took data from five samples of more than 20,000 individuals and showed that polygenic scores predicted longitudinal socioeconomic mobility. In sibling-analyses the sibling with higher polygenic score was more likely to be upwardly mobile. Not only that, individuals of lower socioeconomic status had lower average polygenic scores (Belsky et al, 2018). That is a validation of Herrnstein's conclusion in modern words: namely that differences in social standing is partly due to genetic differences.

As I have shown, there is more than a little evidence that Herrnstein's premises and conclusion were correct. However, this does not mean that intelligence or genetics is all that matters. Many of the studies above, and others like them, also show effects of non-genetic origin. However, to suggest that genetics is part of the explanation is scientifically justified.

Take a look at this.

"...,The Bell Curve. Herrnstein and Murray argue that social inequality (including racial inequality) is the result of inherited variations in IQ. Here, Chomsky presents his critique of Herrnstein’s position:"

Modern genetics does indeed confirm what Hernstein was arguing for.

However, the nature vs nurture debate is a false dichotomy; here is a basic logical argument:

Down Syndrome is not caused by the environment alone.

Therefore, intelligence has a genetic component.

As you can guess, there is no division between genes and behavior, let alone brain structure, so this is why Professor Plomin, a professor of genetics, makes the case that genetic differences are responsible for most variation in psychological traits – things like personality and cognitive abilities- in his most recent book entitled, "Blueprint: How DNA Makes Us Who We Are."

8
What are the effects of negative self image on cognition and brain function?
2
Are social intelligence and emotional intelligence the same thing?
4
Does a non-knowledge based, or knowledge corrected IQ test exist, and what are its results per race?