Are there gender differences in color discrimination ability?

There appears to be a prevalent stereotype that girls seem to have "heightened" color perception. By this term, I mean that they can identify the salient features of different shades of color. However, many ideas that are widespread in public consciousness do not seem to be based on empirical evidence.

Is there any research that has investigated gender differences in color perception? In particular, are there any well-performed experiments in the study of perception or cognitive neuroscience that may shed light on this perceived phenomenon?

There are many 'sources' on the internet that seem to have commented on this, but I can't find any compelling evidence personally. There is some literature on cross-cultural variation and cross-language perceptual differences, is there any literature on cross-gender variation? 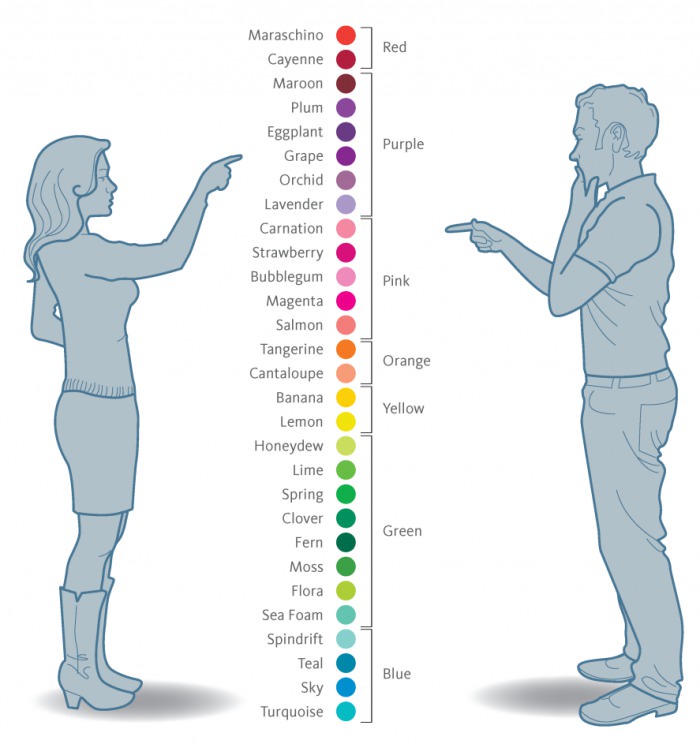 Short answer: A recent study suggests that, if you rigorously restrict the sample to normal vision participants, women do not outperform men in color discrimination.

As @what has pointed out with the link to Google Scholar, there are a number of studies that have investigated sex differences with regard to color vision.

However, if one accounts for the fact that there are more men who have a deficiency in color vision (because they have only one X chromosome which is involved in color vision), the differences appear to be small and may even contradict the stereotype.

I found one study (Rodríguez-Carmona, Sharpe, Harlow, & Barbur, 2008) that seems particularly close to your specific question. Citing from the abstract (emphasis mine):

Generally women are believed to be more discriminating than men in the use of color names and this is often taken to imply superior color vision. However, if both X-chromosome linked color deficient males (8%) and females (<1%) as well as heterozygote female carriers (15%) are excluded from comparisons, then differences between men and women in red-green (RG) color discrimination have been reported as not being significant (e.g., Pickford, 1944; Hood et al., 2006).

We re-examined this question by assessing the performance of 150 males and 150 females on the color assessment and diagnosis (CAD) test (Rodriguez-Carmona et al., 2005). This is a sensitive test that yields small color detection thresholds. The test employs direction-specific, moving, chromatic stimuli embedded in a background of random, dynamic, luminance contrast noise. A four-alternative, forced-choice procedure is employed to measure the subject's thresholds for detection of color signals in 16 directions in color space, while ensuring that the subject cannot make use of any residual luminance contrast signals. In addition, we measured the Rayleigh anomaloscope matches in a subgroup of 111 males and 114 females. All the age-matched males (30.8 ± 9.7) and females (26.7 ± 8.8) had normal color vision as diagnosed by a battery of conventional color vision tests. Females with known color deficient relatives were excluded from the study.

Comparisons between the male and female groups revealed no significant differences in anomaloscope midpoints (p = 0.709), but a significant difference in matching ranges (p = 0.040); females on average tended to have a larger mean range (4.11) than males (3.75). Females also had significantly higher CAD thresholds than males along the RG (p = 0.0004), but not along the yellow-blue (YB) discrimination axis. The differences between males and females in RG discrimination may be related to the heterozygosity in X-linked cone photo pigment expression common among females.

What does this mean?

Citing from the conclusion of the paper

Chromatic sensitivity was measured in a large population of normal trichromat males and females (...). On average, females were revealed to have significantly higher RG chromatic thresholds compared with men on the CAD test and larger red-green matching ranges on the Nagel anomaloscope. A correction was applied to exclude the possible effect of female heterozygotes that were undetected by our screening procedures upon our gender comparisons. On the basis of our results, we can confidently conclude that women do not have superior red-green colour discrimination than men. However, the possibility arises that they may on average have poorer discrimination. Genetic and physiological explanations related to a sexual dimorphism in X-linked cone photopigment expression are offered as to why this may be the case.

Not the answer you're looking for? Browse other questions tagged perception vision color sex-differences gender or ask your own question.