A rather basic question, but I don't know the answer to that - What is human "attention" that can be focused on different parts of the body or outside objects?

For example, I can focus my attention on my hand. What happens in the brain when I do so? Is attention localized to some specific brain area or neurotransmitter system (ex: reward seeking is mediated by the limbic system)?

Firstly its important to note that attention basically the outcome of automatic processes, although attention may easily be directed by conscious choices.

As a previous poster mentioned the reticular formation does have a mediating role in attention. However its doesn't really control attention, so much as it does direct it based on processing in other brain areas, Sturm and Willmes (2001) aptly encapsulate this as...

For an interpretation of the findings, we have proposed a network in which the anterior cingulate gyrus and the dorsolateral frontal cortex intrinsically control the brain-stem NA activation system via the reticular nucleus of the thalamus.

The vast majority of attentional processing at the most basic level is scanning the environment, in order to create a simulation in our minds. This simulation is not perfect by any means, in fact it appears that we only pay attention to a few key features and it is only when we focus or are guided to use a narrow area of the perceptual field that we attended to things we might not have seen, such as demonstrated by the phenomenon known as 'change blindness'.

From a perception perceptive, early attentional processing is influence by a number of factors relating to stimuli variability, which may guide the deployment of attention, such as motion, size and colour. 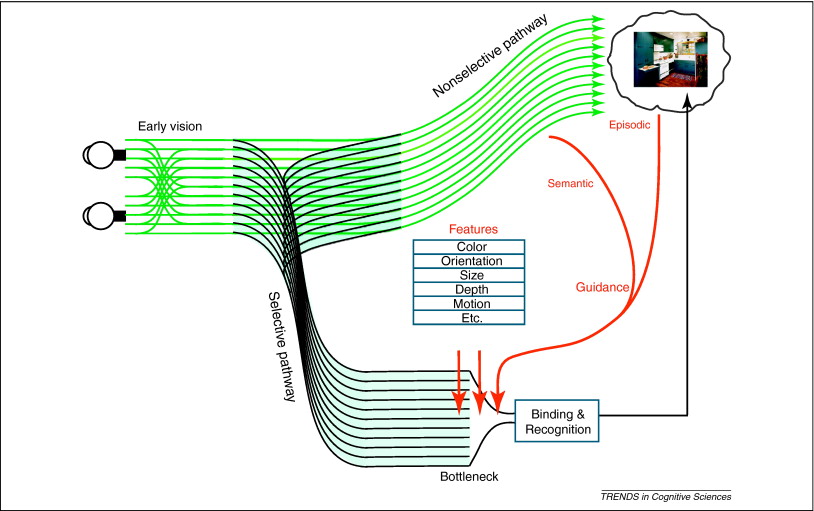 Fig 1. Unguided environment scanning is non selective, feature scanning which requires more processing is selective and aids quick recognition. Searching for an object requires use of both of these systems.

This early feature recognition is strongly associated with activity in the ventral visual system, see fig 2.

The excellent work of Prof. Jeramy Wolfe, over views much of this perceptual research. When looking for particular information an individual easily guide there attention to the relevant information, such information may even be primed rather than instructed. The pathways and areas of the brain associated with selective attention are relatively simple: the frontal eye (motor control), super parietal lobe (suppress normal attentional flow to specify new target), intraparietal sulcus (spatial orientation, salience mapping, and short-term visual memory). 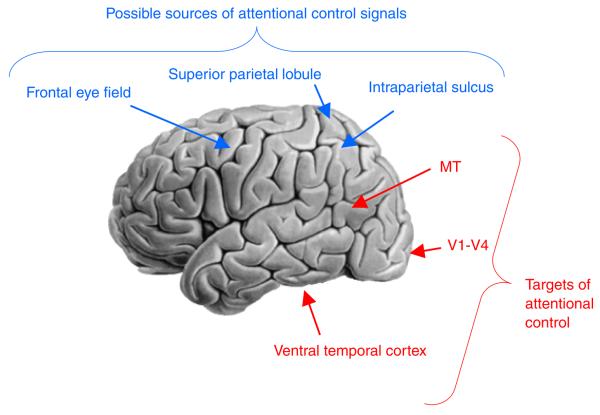 Luckily after years of research we understand attentional processing from a perceptual viewpoint rather well, however simple questions are far more complex than they at first seem. The current focus on research are narrowing down these areas, personally I think the more interesting questions regard saliency and hedonics. These questions look at reward processing in the brain, and how attention is implicitly guided, if your interested in this then you should check out Kent Berridge's research, which guides this area of research. Finally I'll just mention that acting on implicit processes seems to depend on executive functioning, and working memory capacity.

I'm unsure if there are necessarily specific areas for focusing on body parts, but I would assume that what you are talking about would function as part of the attentional system, which is a form of executive control; and is found in specialized cortical areas of the frontal and parietal lobes (Posner & Peterson, 1989). Attention is carried out by a network of anatomical areas. It is neither the property of a single center, nor is it a general function of the brain operating as a whole (Mesulam, 1981; Rizzolatti, Gentilucci & Matelli, 1985).

Recent brain-imaging and neurophysiological data indicate that attention is neither a property of a single brain area, nor of the entire brain. While attentional effects seem mediated by a relative amplification of blood flow and electrical activity in the cortical areas processing the attended computation, the details of how this is done through enhancement of attended or suppression of unattended items, or both, appear to depend on the task and brain-area studied. The origins of these amplification effects are to be found in specialized cortical areas of the frontal and parietal lobes that have been described as the anterior and posterior attention systems.

If I am reading this correctly you are essentially asking where is the consciousness located in the brain. The system would be the RAS (Reticular Activating System) and you can read up it on the good ol' wakapedia. http://en.wikipedia.org/wiki/Reticular_activating_system#Attention

I'd also like to note that it is not specific to humans.

Not the answer you're looking for? Browse other questions tagged cognitive-psychology cognitive-neuroscience attention or ask your own question.

0
What happens inside the brain when we concentrate?

19
Thinking, Fast and Slow vs. Mindfulness vs. Flow
4
Where does action based on thought originate within the human brain?
5
Is the brain inherently social?
4
During body-scan ('sweeping') meditation, what does brain-imaging (e.g. fMRI) look like?
1
What can coma patients report about their experiences - if anything?