Where in the Big5 does shyness belong?

I just stumbled upon something contradicting:

What is correct? Can an extrovert be shy or not?

Based on my experience looking at factor analyses of personality facet structures like the NEO-PI and NEO-IPIP, I think that shyness is mostly captured by low levels of extraversion. Enjoying, getting energy from, and actively engaging in social interaction is a central component of extraversion.

That said, as with many general personality constructs, the Big 5 provides a general framework for understanding them. It is common for there to be a profile of meaningful correlations with the Big 5 where some are larger and some are smaller. Given the elements of anxiety and negative emotions that may be associated with shyness, especially extreme shyness, correlations with neuroticism are also likely.

From an empirical perspective, I've often found that the self-consciousness facet on the NEO-IPIP loads most strongly on a factor with other extraversion facets.

I also note that there are a range of ways of conceptualising introversion. Some emphasise shyness and social anxiety. Others frame introversion more positively such as enjoying doing work and personal activities by yourself, or preferring one-on-one interactions as opposed to large group interactions.

As an empirical example, we did a study (Horwood et al, 2015) looking at factor and facet correlates of Type D personality. One of the subscales of Type D is called social inhibition, and it is related to shyness (e.g., items like "I often feel inhibited in social interactions", "I find it hard to start a conversation).

This next table shows the correlations (both zero-order and semi-partials controlling for the Big 5) with Social Inhibition. The largest correlations are for warmth and gregarisiousness (negative correlations), but the correlation with self-consciousness is almost as high. 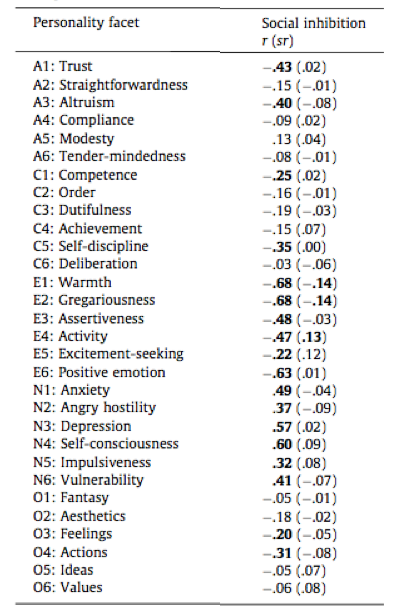 Not the answer you're looking for? Browse other questions tagged personality extraversion neuroticism or ask your own question.

5
Facet versus scale prediction of Big 5 personality
18
Can we change our personalities?
2
Are woman more Judging than men in the MBTI?
5
Which personality trait(s) characterize high need for external validation?
5
What characterises people who stay calm in crisis situations?
4
What are the personality and behavioural correlates of divorce?