Is there a way to use a STDP learning rule on rate-based neurons?

Rate neurons are often used in simulations because they are computationally cheap compared to simulating spiking neurons. In order to implement STDP, spikes are generated using an inhomogeneous Poisson process with the rate parameter defined by the current rate of the rate neuron.

What I would like to know is whether a shortcut has been developed to calculate the weight changes due to STDP directly from the temporal dynamics of the pre- and post-synaptic weights without having to explicitly generate spike times through a poisson process.

The appropriate way to do this is to find the cross-correlation of the time series of rates of the two neurons. Then take the dot product of the cross correlation with the STDP kernel (i.e., the integral of the correspondence at each point in the STDP window between how much STDP "likes" cross correlation at that lag and how much cross correlation there actually was at that lag). This gives a value that, when properly scaled, tells you the amount of weight change that synapse should receive. 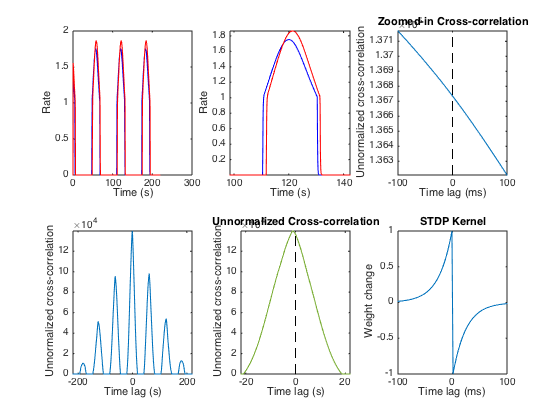 Not the answer you're looking for? Browse other questions tagged model or ask your own question.