Why is the order of white/grey matter different in the brain and spinal cord?

neuroscience neuroanatomy
Share
Improve this question
asked May 25 '15 at 23:15

I'll tackle this question from a functional point of view.

In the brain, the gray matter is basically the cortex, the white matter lies mainly underneath it. The Cortex is the place where all the higher mental processing takes place (Fig. 1). 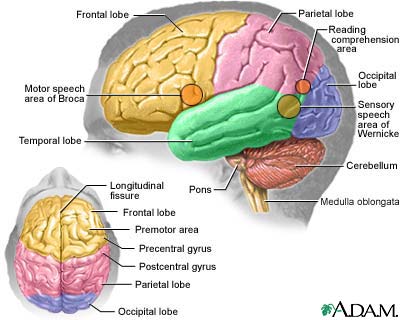 The white matter in the brain connects the various parts of the cortex so that information can be transported for further processing and integrated. 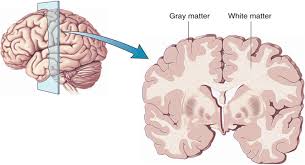 Since the cortex is the 'processor', it makes sense to connect the parts subcortically (more efficient as it leads to shorter connections). However, the cortex has been expanding very late in evolution, so this 'endpoint reasoning' can be contested, because from an evolutionary perspective, more cortex was needed and hence it was expanded right where it happened to be, namely in the outer part of the brain.

In the spinal chord things are pretty much reversed; grey matter within, white matter around it (Fig. 3). 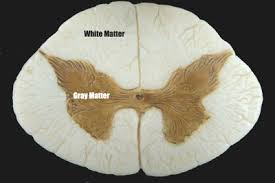 The white matter, again, is formed by various tracts (Fig. 4) and the grey matter with parts that are processing information (fig. 5).

Again, the structure makes sense in terms of efficiency, as the reflex arches combine the sensory and motor tracts to govern reflexes, and therefore processing them from within saves space.

This is a simple logic to understand. In the brain the grey matter is on the cotex.Grey matter is a tissue made of the cytons due to which the cotex is pinkish Grey in colour. The White matter,the tissue made of axons is inside to the brain. Cortex is the processing centre which has cytons. In the spine the processing is to be done internally. So the cytons concentrate inside the spine which we call the Grey matter.Similarly the axons are to be around the Grey matter to transfer messages from and to other organs.They form the White matter outside the spine.

Not the answer you're looking for? Browse other questions tagged neuroscience neuroanatomy or ask your own question.

10
Non coitus sexual activity and the brain
10
Why do long range axons in mammals travel in white matter tracts?
5
How far can a signal travel in the neocortex without passing through the white matter?
5
How many different synapses can an axon form? How do they differ?
3
What is the meaning of “the inner leaflet of their lipid bilayer corresponds to the outer leaflet of the plasmalemma.”
2
How do the outer hair cells amplify the traveling wave?