Is consciousness a sub product of the brain or is there a duality? [duplicate]

I am trying to understand what consciousness is, based on my basic knowledge of our senses, artificial intelligence (computer vision, specifically) and some philosophy. Here's my reasoning:

As far as I understand it from my Neural Network class, each eye captures the light and transmits it through electric signals to the brain. Each action potential can be seen as a binary 1, no activity as a 0.

This stimulates some of the neurons in the visual cortex, which allows our brain to interpret and understand what the eyes have captured.

In computer vision, this is where "sight" ends: the computer detects what's in the image, based on its knowledge base - its training set - and that's it.

So why does the human brain take the extra steps of combining both signals into an image - i.e translating the different waves of the electromagnetic spectrum into shapes, colors, etc -, turning it upright and displaying it to ourselves?

The same could be said, as far as I know it, about the other senses: hearing would be detecting vibrations in the air, but the brain also translate these into sounds.

Does this hint that Descartes' dualistic definition could be true, that our consciousness is separate from the brain? Or could consciousness be a sub product of the brain, a consolidation of what each one of its areas are processing, in order to better understand the world (as in Stanislas Dehaene's workspace neurons cognitive model)?

edit: I've been thinking a bit more about the subject. If there are workspace neurons responsible for consciousness, then there should be a region of the brain that is constantly active, at all times.

After a bit of - online - research, I've stumbled upon the Default mode network (DMN), which is anti-correlated to the Task-positive network (TPN). Interestingly, the DMN is active when the individual is not focused on an activity - at rest. Furthermore, there is a possible increase in connectivity between DMN's nodes during REM sleep - when we dream. On the other hand, TPM is most active during attention-demanding tasks. It has therefore been theorized that both are elements of a single default network with anti-correlated components (in an scientific paper behind a pay-wall, so I'm quoting Wikipedia).

Plus, both networks involve the fronto-parietal attention network, where it is believed the workspace neurons are located.

I couldn't help correlating the DMN and TPN to Carl Jung's theories of the Conscious and the Unconscious - which I am particularly fond about. If these wild conjectures I am forming are correct, then we could have the following (oversimplified) neural correlate of consciousness: 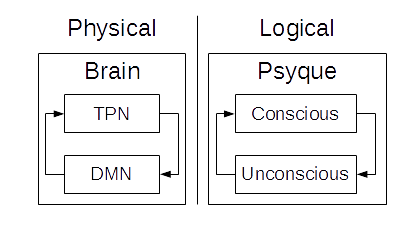 In this idea, exchanges between TPM and DMN occur through neurotransmitters, while exchanges between the conscious and unconscious happen using psychic energy (as in the energy from the psyche, not supernatural powers). Furthermore, the collective unconscious would then be inherited from human to human - embedded in our DNA. If true, then there would be discernible patterns in a newborn's brain...

So, going back to A.I, a conscious agent would not, theoretically, be a single agent, but instead a multi-agent collaborative system...

Now, I have very basic knowledge and lack scientific research on these topics, but I am interested in learning a LOT more. Is this theory absurd and blatantly wrong, or is it worth pursuing as a hypothesis?

cognitive-neuroscience vision consciousness philosophy-of-mind
Share
Improve this question
edited May 16 '15 at 3:28
Tarek
asked May 14 '15 at 2:17

Your question is about the hard problem of consciousness, which is basically the question of how qualia can be explained in a mechanistic way. As alluded to by the name of the problem, it's hard to give a satisfactory answer. The answer right now is: we don't know.

There are some theories about how qualia and consciousness could have a neural basis (see this question and this wikipedia article). But none of these theories are widely accepted by cognitive scientists and there is still considerable debate over the issue.

Your question also illustrates another philosophical issue in the philosophy of mind. You asked:

So why does the human brain take the extra steps of combining both signals into an image - i.e translating the different waves of the electromagnetic spectrum into shapes, colors, etc -, turning it upright and displaying it to ourselves

Not the answer you're looking for? Browse other questions tagged cognitive-neuroscience vision consciousness philosophy-of-mind or ask your own question.

50
What are current neuronal explanations and models of 'consciousness'?
9
The mind as a state of matter or physical system?
-1
What is the exact chemical reaction that gives consciousness?
1
How a living being (a huge collection of atoms) perceive things?

19
Is there a region of cortex which over a period of development becomes the seat of self?
6
Does the structure of consciousness mimic that of the visual process?
5
How can machine possibly possess consciousness if computation is a human idea?
1
How do thoughts work at the neuron level?
5
Is the brain inherently social?
11
Is a network of neurons the only factor in memory?