Performance of a group solving a cognitive task: How does it scale?

Some intellectual, cognitive and perceptual tasks can be solved collaboratively. It is common knowledge that group performance is better than that of each single individual due to exchange of information (and without going into issues of motivation).

One widely known phenomenon is Wisdom of Crowds - when a group decision is much more accurate due to the averaging of individual biases. However, it is not the only possibility. Sometimes, a task can be divided into parts (and each participant works efficiently on his/ her own). Sometimes there are tasks too difficult to solve but easy to demonstrate that an answer is correct (and it suffices to have only one person in the group who answers correctly to make the group decision correct).

What I am interested in is, how the group performance scales with the group size? (The measure of performance can be error rate, time needed to complete a certain task or the deviation from the right answer.)

I am the most interested in low-level cognitive tasks (e.g. perceptual or linguistic), especially two-choice decisions (but also multiple choice, counting of blobs, solving a puzzle...). However, other quantifiable measures for cognitive task (including, say, time to complete a certain programming project vs number of programmers) are of my interest as well.

When it comes to the relation to my paper, I am curious if I miss an important reference or if my theoretical results can be supported (or undermined) by any existing experimental results (or even related in other context).

It's a big topic. The relationship between group size and performance on a cognitive task is going to vary by several factors.

Here are a few thoughts:

I recently read a paper, which showed a mathematical model for performance scaling of research groups in different scientific branches. I'm aware you were originally asking for smaller "cognitive tasks" and project-like group-processes in the comments, but output and quality of publications/patents is probably anyway a better and more objective measure on a larger scale. Also, the paper shows that optimal group sizes in different academic disciplines varies strongly, so comparing, e.g. single groups in math and biology solving tasks is probably not very meaningful (Jeromys 1st comment) for your original question and only valid for exactly that discipline/distinct cognitive task, which would make a general analysis/conclusions tricky/impossible.

The extent to which a group’s research quality is higher or lower than average is a function of many parameters such as the innate calibre, education and experience of its members, the quality of managerial support and of facilities and infrastructure, the impact of external and international collaborations, the prestige and confidence inspired by the institution and by past successes, etc. All of these parameters contribute to the quality of an individual group but, in general, research quality is size independent according to this argument. [...] However, it would be naive to retain this viewpoint alone because it neglects the importance of interactions between group members.

A group has $N$ members, therefore the total number of pairs of individuals along which channels of communication can open is

So group quality tends to rise continuosly with quantity. The main statement of the article however is that the rise of quality is independent of group quantity after a group reaches a upper critical mass ($NN_{C}/2$ linear scaling) and increaes only with much smaller slope further, basically because a single researcher can only communicate meaningfully with a limited number of other researchers (sub-groups build within big groups, specialization) 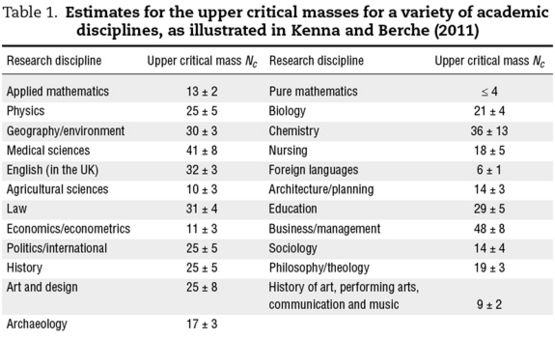 So the scaling for groups is the same, as mainly determined by meaningful face-to-face communication, the different critical mass among different academic disciplines has probably to do with the necessary amount of researcher you need to run, for example, a high-technology research laboratory (many students who master the single instruments) vs. mathematics (formalized language, not the broad spectrum of problems like in natural sciences) vs. humanities (reading and discussing a lot of literature)

Side note: Apart from this critical research group size I'm aware of a new trend in bigger companies to forbid or restrict e-mailing for the majority of employees, because only a marginal amount of this e-mails is really important according to studies (15% I rememember mentioned by Volkswagen AG, but not the source currently)

Not the answer you're looking for? Browse other questions tagged decision-making mathematical-psychology problem-solving collaboration wisdom-of-crowds or ask your own question.

22
Applications of computational learning theory in the cognitive sciences
8
Best practice to handle double negatives when using the expectancy-value model?
2
Why does splitting attention between a primary task and another task appear to improve performance on the primary task?
5
How has geometry been applied in cognitive science?
6
What experiment in a simple decision task should we run to obtain one million trials?
5
How does TD-learning explain trace conditioning?
3
How do I find Computer Science-Focused Cognitive Science Labs for Research?
0
Cognitive bias with trial and error problem solving